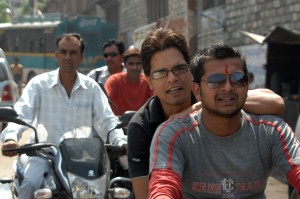 I remember Alan Whicker. I’ve seen Clive James. I watch Michael Palin. I knew what to expect in India. So I reckoned anyway. Nothing can prepare you for the stress of the roads.

It’s not so much the hustle and bustle and bump of traffic in the congested cities, it’s the torturous journies between towns that leave your brain battered and bruised.

Imagine travelling from Manchester to Newcastle or London to Leeds on a country road which regularly descends into a dirt track and which is littered with cows, horses and carts, huge trucks, motorcycles, rickshaws and cars all travelling on both sides of the road, often four abreast at 90mph, while oncoming traffic whizzes towards you.

For someone who prides himself on not getting stressed-out this was too stressful to bear.

Ludhiana to Chandigarh. Three hours each way. Nightmare. The booting and braking of my friend Hemant on dusty tracks left me scared of Ford Fusion’s for life. I decided to shut my eyes for almost the entire journey back to Ludhiana.

Ludhiana to Amritsar. Four hours each way. Absolutely horrendous. The Ayrton Senna-style drive to Amritsar was bad enough- we were late for the India/Pakistan border closing ceremony at Wagah. But coming back in the dark was emotionally devastating. Parts of this journey on the famous Grand Trunk Road were on dual carriageways. Unfortunately, dual carriageways do not stop some trucks from driving the wrong way down them. And then there was the Holy Cow! moment when Hemant blackspotted his Fusion’s tyres when Daisy the cow meandered into our 80mph path on a typically unlit piece of carriageway.

Ludhiana to Corbett National park. Fifteen hours in a mini bus. Along some of the bumpiest roads ever misconstructed. This was a nightmare from start to finish. So traumatised I was by this that my final journey, intended to be from Nainital to Delhi in this very same minibus was dumped in favour of the train. A decision I did not live to regret.

India has a huge amount to offer. Temples, mountains, culture by the bucketloads and enough diahorrea to keep everyone busy. But the roads, the speed and the fearless head-on driving give this monumental country it’s own unique selling point. 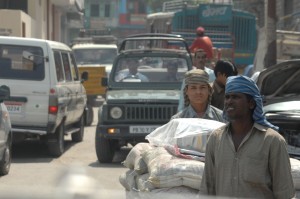 This entry was posted on May 18, 2009 by Garry Cook in chanigarh, Corbett, india, india roads amritsa, ludhiana, Nainital, roads.