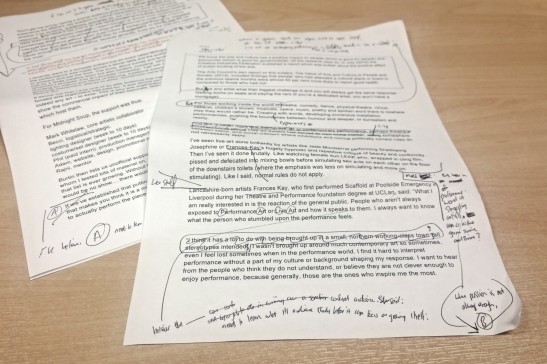 Earlier this year I won a place on the #BeACritic campaign, produced and funded by Liverpool John Moores University’s School of Art and Design, Arts Council England and The Double Negative.

It was held at Tate Liverpool. It was a built around a masterclass by Tim Marlow, a rather distinguished art critic himself.

After month’s of research I have almost finished my article on live art in the north west. It will be published by The Double Negative shortly

Before that, though, I present some of the words from that article which got the chop – finely crafted sentences deemed surplus to requirements in a discursive essay on contemporary performance.

I’ve always found my writing process a long-winded affair. Scruffy sentences quickly committed to paper before I forget the idea I was thinking, followed by several heavy edits which begin with those ideas themselves before analysing the structure of piece as a whole and then finally working on composition of specific sentences until something flows across the eye as if those words had ordered themselves and sat waiting to be read since the beginning of time. Or something like that.

And here are those words cruelly chopped out of the article:

We know the arts and culture has a positive impact on people (which is good for people) and economies (which is good for governments). All the research says so. In July (2015) the Creative Industries Federation published a report which was bullish about the positive effect of public funding of the arts.

The Arts Council’s own report on this subject, The Value of Arts and Culture to People and Society (2014), included findings that people ‘who had attended a cultural place or event in the previous twelve months were almost 60 per cent more likely to report good health compared to those who had not’.

And this is never more true than in live-art or contemporary performance, perhaps theatre’s most exclusive genre.

In the north-west the live-art movement is being led by key institutions like Word of Warning/hAb and Contact Theatre in Manchester, and university courses like UCLan (in Preston) who put on the Derelict festival.

…and paying the rent (if you’re a dedicated artist, you won’t have a mortgage).

For those working inside the world of theatre, comedy, dance, physical theatre, circus, cabaret, children’s shows, musicals, opera, music, poetry and spoken word, there is nowhere else they would rather be.

[Frances] Kay adds: “I’m not sure there is a defiant aim for me, or at least not yet.”

From the point of view of sustainability (there’s no point even entertaining the world ‘profit’ in relation to contemporary art), what motivates an artists is as interesting as the work itself.

She added: “What I am really interested in is the reaction of the general public. People who aren’t always exposed to performance art or live-art and how it speaks to them. I always want to know what the person who stumbled upon the performance feels.

“I wasn’t brought up around much contemporary art so sometimes even I feel lost when in the performance world. I find it hard to interpret performance without a part of my culture or background shaping my response. I want to hear from the people who think they do not understand, or believe they are not clever enough to enjoy performance, because generally, those are the ones who inspire me the most.

“Don’t get me wrong, having a diverse audience gives the performer the opportunity to experience the different, say academic or cultural interpretations which are interesting, whether it be students, academics, journalists etc, but I am so intrigued by the passers-by response.”

If live-art is to grow it needs these passers by. Too often performances are made to fellow performers. Ask any artist what their biggest challenge is and you will always get the same response: Getting bums on seats.

EXTRA EDIT (these words were cut out of the main article in another re-write):

Nationwide, Fagan name-checks Cardiff as a leader, mainly because of the university’s dedicated live-art degree, plus Bristol’s Between Festival and Fierce in Birmingham.

“The north west does have Word of Warning an Manchester based organisation who not only put on events but inform people about live art stuff happening around the region.

“Still outside Manchester the live art scene seems pretty sporadic, blink and you miss it – especially in Liverpool – so there is space for a festival like Fierce.”

, believes the strand needs to learn what its audience thinks before it can focus on growth.

But it’s not all one way. Poor promotion by artists, particularly in the sometimes over-complex words used to market a piece of work, scares off potential new audiences.

If we’ve established that putting on a show is a hugely collaborative, complicated process, what about opportunities to actually perform in the north-west?
While Liverpool has developed its arts scene beyond recognition over the last decade, Manchester, with Emergency, Hazard and its own International Festival (MIF), still leads the way in performance events.